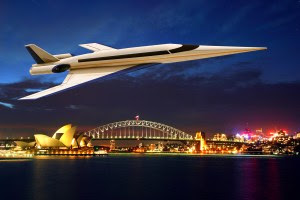 Getting to Places in Half the Time

The Concorde supersonic jet was decommissioned 18 years ago.  Now there is a new entry in the SST travel space.  The Spike S 512 is the ultimate in flying.  Travelling at supersonic speeds without sonic booms, the jet is quiet and can cut travel times in half.  Now under development by Spike Aerospace headquartered in Boston, the jet will fly at Mach 1.6 and will travel 720 km/h faster than any other civilian aircraft.  An example: this SST will enable passengers to fly from New York City to London in just three hours.

The Spike S 512 is a luxury business SST jet.  It can carry 18 passengers.   The cabin is pure luxury and advanced tech.  There is high speed wireless internet, panoramic views as you fly to your destination, plush seating, full telephone services, high definition display screens, reduced cabin noise, higher oxygen levels and more. This new SST is not just on the drawing boards.  It is under development at Spike headquarters in Boston.  On their website, they are hiring as they ramp up for takeoff.  The jet is expected to debut in 2028.