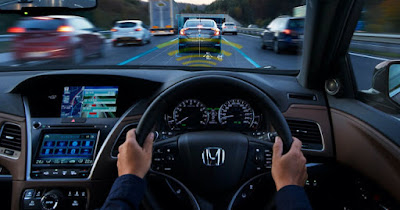 Honda has made a big global automotive step in the autonomous driving direction.  In Japan, it has just rolled out a partially self-driving Legend sedan.  That makes Honda the world's first automaker to sell a vehicle equipped with new, certified level 3 autonomous driving technology.  The vehicle is available for lease in Japan.  The rollout is a very cautious one with a limited supply of 100 vehicles in Japan.  This is a powerful example of a concept, self-driving car being commercialized.

The new technology is highly advanced.  The car's "Traffic Jam Pilot" system controls acceleration, braking and steering under specific circumstances.  Its purpose is to avoid accidents caused by human error.

How The Tech Works

When the system is activated, the driver can watch a movie or use the navigation on the screen, for instance, to wait out a traffic jam.  According to Honda, the system can also alert the driver to acknowledge that the controls to the self-driving system are engaged. The alert is sent by a vibration in the seat belt.  If the driver doesn't respond, the system starts decelerating the vehicle and brings it to a stop.  The vehicle alerts surrounding cars by flashing its emergency lights and honking the horn.  Honda's first 100 semi-autonomous Legends are now hitting the Japanese car market.  The level 3 autonomous driving system has been approved by the Japanese government.