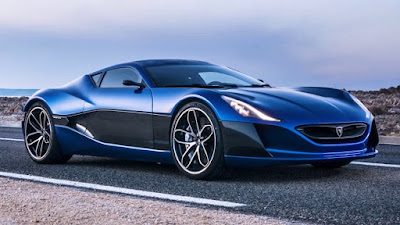 Germany based luxury car maker Porsche is betting big money on and has big plans for Croatian supercar manufacturer Rimac Automobili.  Rimac is known for its Concept 2, a fully electric, semi-autonomous supercar sportscar that can hit speeds of 258 mph.  The EV runs on four electric engines and according to Rimac "is alive with technology".

Porsche is participating in a funding round in which Rimac will raise between $157 million and $181 million.  Porsche already owns a 15.5% stake in Rimac.  Porsche is considering raising its stake in the electric supercar maker to just under 50%.  Intense negotiations are currently underway between Rimac and Porsche.  The deal would include the transfer of Porsche's supercar line Bugatti to Rimac.  Porsche CEO Oliver Blume feels the two are a great technological and automotive innovation fit.

Rimac In the Fast Lane

The Concept 2 is designed for racetracks and for highway driving.  Rimac has developed a highly advanced electric supercar platform used for Concept 2 and also sold to other automotive manufacturers.  Rimac is currently more than doubling its workforce to 2500 and plans another round of funding late in 2021.