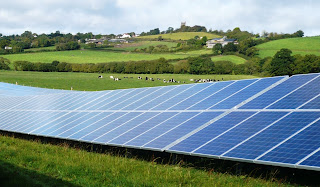 In a big reversal of former President Donald Trump's denial of climate change, President Joe Biden has a very aggressive green energy agenda.  Mr. Biden wants to cut US solar energy costs by 60% within the next decade.  And, he pledges to decarbonize the US power industry by 2035 by having it run on entirely green energy.  He wants the industry to produce 100% green electricity by 2035.  President Biden is acutely aware of the global damage that greenhouse gas emissions are doing to the environment, including the waves of severe weather consistently hitting the US with forest fires, flooding and severe storms.

The US Department of Energy (DOE) says that to achieve the President's solar goals, solar energy needs to be installed at five-times the current rate.  To do that, DOE says new, innovative technologies are needed.  The DOE is using $128 million to start funding promising new technologies such as perovskite cells, which are a less expensive alternative to the silicon cells in solar panels currently in use.  The money will also be used to give longer life through upgrades to photovoltaic solar plants and to fund solar technology R&D into concentrating solar technologies and the emerging area of cadmium telluride.  DOE Secretary Jennifer Granholm says the first burst of funding puts the US "on the fast track" to reach President Biden's goal of 100% clean electricity by 2035.