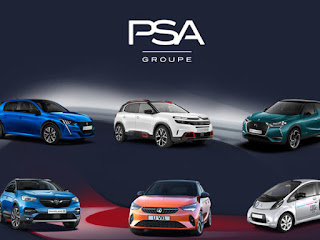 Combining to Share Electrification and Autonomous Technology Investment Costs
On Wednesday, December 18, 2019 Fiat Chrysler and PSA Peugeot are expected to announce that they are merging the two global automotive companies.  The tie-up will create a $50 billion entity that will produce 8.7 million cars a year.  The combination will create the world's fourth largest automaker after Toyota, VW and the Renault-Nissan alliance.

PSA Likely in the Driver's Seat
PSA Group CEO Carlos Tavares is expected to be the CEO of the new entity.  He's known as a cost cutter and brand turnaround expert at the French based PSA. He led Nissan America and has extensive knowledge of the US market.  Fiat Chrysler Chairman John Elkmann, whose family founded Fiat in 1899, is expected to be Chairman of the combined organizations.

Electrification
This merger is a strategic move to share the cost of developing electric and autonomous cars.  Fiat Chrysler has been looking for a partner to invest in electrified power trains and autonomous technologies.  PSA Group has secured the backing of its largest shareholder, the French government, for the merger.  Fiat Chrysler's previous deal to tie-up with Renault failed last spring.
#$50Billion merger #auto mergers #electric vehicles #Fiat Chrysler #France #Milan #news #PSA Peugeot #self-driving tech #US