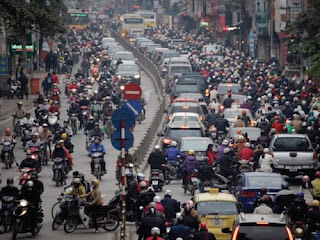 E-Bike Riding
It's been a slow sales climb for e-bikes.  For instance, in 2013, only 185,000 e-bikes were sold in the US.  Since then, there's been a seismic change that includes greater power, improved lithium ion batteries, greater tech and better pricing.  Plus, a focus by global cities and nations to cut carbon emissions, reduce car traffic and go for zero emissions as soon as possible. That ushers in a new era of electric bikes in  big cities globally.

Need for New Infrastructure
To make the new e-bike travel market happen, there is a need for new infrastructure.  Priorities are regulations to support networks of protected bike lanes for safe electric bike riding and also places to park and lock the e-bike for protection.  It's the future of travel and it's riding up to your doorstep as an environmentally friendly means of transportation right now .