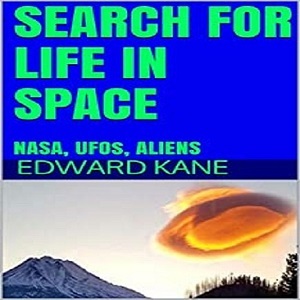 New Book on Search for New Forms of Life in the Universe
Are there new forms of life, perhaps even highly advanced civilizations, in space?  The collective opinion of many top global scientists and experts at NASA, the European Space Agency and the Chinese Space Agency is YES.

Visitors From Space
As a journalist, Ed Kane has written "Search for Life in Space" to document the scientific undertakings now underway to make our civilization the first to find life in the universe - life that may be radically different from ours.  We start the space journey with images of UFOs over the Atlantic and Pacific Oceans.  The images were shot by US Navy pilots and just released by the US Department of Defense to show that UFOs are real.

NASA, UFOs and Aliens
NASA has made a priority of finding new forms of life in the universe.  In fact, NASA Director Jim Bridenstine says "we are well on our way to discovering it".  Ed's book on Kindle and Amazon showcases the extraordinary scientific discoveries and missions now underway to find new forms of life in the vast realms of space.  These are explorations that you won't want to miss.
On Amazon at ASIN: B088PX6HFD


I co-authored the books with Ed.