UK Inventor Does It 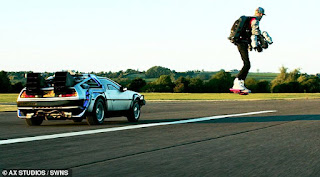 A UK inventor Sam Rogers has taken to the skies on a hoverboard using a $432,000 jet flying suit he helped to design with a 3D printer.  The 24 year old is believed to be the first to fly a real-life hoverboard that was made famous in the 1989 blockbuster movie "Back to the Future" Part 2 that the character Marty McFly, played by Michael J. Fox,  flew.  A Delorean time machine was part of the movie and the real-life scene at a UK airfield.

Rogers is design lead and test pilot for the British aeronautical innovation companies Gravity Industries and Additive X.  The 1000 brake horsepower jet suit weighs 60 pounds.  There are 6 kerosene fueled turbines on the back and arms, each with 50 pounds of thrust.  The flight path is controlled by the human's body movements.  There are some controls in the grip handles. This unusual form of personal air mobility gadget is said to be able to do more than 50 mph.

Sam graduated from Loughborough University in the UK in 2019.

As part of his degree, he designed and 3D printed a jet suit in aluminum, steel and nylon.  The $432,000 prototype jet suit he helped design and used in his McFly adventure was 3D printed with metal and polymer.  He also helped design the hoverboard which he attaches to his feet with velcro. He says he developed his love of aerospace, design and flying from watching movies like "Back to the Future" when he was a child.  His invention is the flying hoverboard and jet pack for personal air mobility.