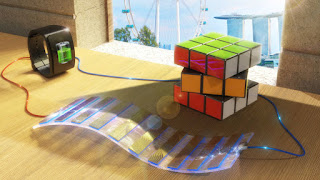 Source:  NUS Device
This is An Electrifying Invention
This new invention is called a shadow-effect energy generator.  It's the stuff of science fiction but it's real.  The device produces a current from the differences between bright light and shadowy areas.  The bigger the contrast in light the more energy it produces.  The device can produce enough energy to power a small electronic device like an electronic watch.  The materials scientist inventor - Swee Ching Tan of the National University of Singapore - says this allows us to "harvest energy anyplace on Earth."
Shadows of Value
The new device is similar to a solar cell.  Tan created the generator by placing a thin coat of gold over silicon.  Light shining on the silicon energizes its electrons. With the gold layer, the generator produces a current when part of the device is in shadow.
Next Steps and Potential Skyscraper Future
At this point the team is working to increase the amount of light the generators can absorb to boost their performance.  In the future, these generators may produce enough energy from shadows around a solar array to power skyscrapers and homes.
"Important Innovations Collection" #devices #energy #gadgets