BMW's Aggressive Carbon Emissions Commitment
Concerns about the economic risks of CC are growing globally and pressure is mounting on businesses to join the low carbon economy.  The global automotive industry is responding by rolling out a growing number of new, zero emissions and hybrid electric cars and other vehicles.  BMW has announced that it will cut its carbon emissions by 20% in Europe in 2020.  They say 2/3rds of the cuts are coming from their electric and hybrid vehicles and the remaining from new, more efficient combustion engines. This is impressive, immediate action to fight climate change that is leading the way for global automakers. 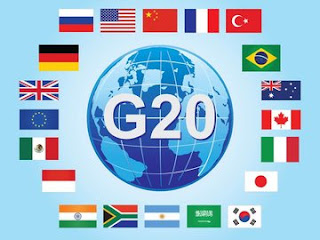 CC Watch But No Risk Warning from G20
Financial officials from the world's 20 largest economies cited Climate Change in their final communique for the first time during the Trump Administration. In the communique that was just released, they did not call CC a major risk to the global economy as many leaders and organizations such as the International Monetary Fund believe it is.  The US blocked CC from being listed as a downside risk to the global economy. Instead the G20 said they are "examining the implications of CC" for global financial stability. It is considered by some at the G20 a step forward in the CC discussion.


CC's Potential Huge Financial Risk
Many global leaders believe that CC poses a very significant risk to the global economy.  A recent forecast suggests that the world's financial services sector, alone, risks $1 Trillion in losses if it fails to respond quickly to CC.  The industry could be hit with big fines, such as a carbon tax.  Meanwhile, the financial experts at the G20 had some good news.  They're forecasting a moderate pick-up in global economic growth in 2020 and 2021.
# climate change #2020 cuts #BMW #carbon #emissions #G20 #news