- February 24, 2020
Number of Environmental Factors Encroaching on their Habitats 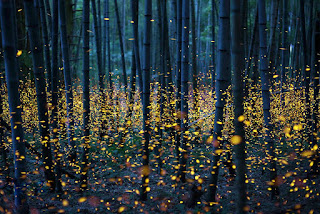 New Global Research
One of nature's most beautiful and mysterious creatures - fireflies - are under threat globally.  This is another vestige of the perils of the global environment which is warming and being altered by Climate Change.  There are a number of causes to this existential threat including habitat loss and pesticides.  But a surprising new cause has been added by scientists to the mix.  The global expansion of light pollution from electric lights is causing major disruption to fireflies' nocturnal flights.  The world's light pollution is adding to the environmental stress already harming the global firefly population.

Vanishing Natural Beauty
A global assessment involving 350 top firefly experts has just been released.  Their conclusion is that some of the 2,000 species of fireflies now face extinction.  They found that fireflies are rapidly vanishing from many places where they were abundant.  Ironically, they also found that some species appear to be doing okay. The big disruption to the habitats of fireflies is being caused by urbanization, agriculture and industrialization.  The second biggest problem is electric light pollution.  Satellite imagery shows that light pollution is relentlessly expanding on a global basis.