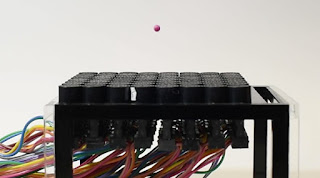 Researchers from the University of Bristol UK have developed a system that helps objects levitate - literally floating on air.  They're called acoustic tractor beams.  The power of the sound can hold particles in midair.  And, unlike magnetic levitation they can hold most solids and liquids.

Medical Significance
This technology is a first.  It may lead to the manipulation of micro-surgical instruments and drug capsules within the human body.  The scientists have shown they can trap & stabilize objects larger than the wavelength of sound in an acoustic tractor beam.

Results & Someday Human Levitation
Using this system, the scientists held a 2 centimeter polystyrene sphere in the tractor beam.  That's the largest object ever levitated by sound.  Their research suggests much larger objects can be levitated.  The scientists use rapidly fluctuating acoustic vortices similar to tornadoes of sound.  The loud sound surrounds a silent core.  By expanding the silent  core they can levitate larger objects. They think it may someday result in human levitation.