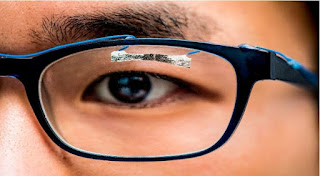 New Sensors
University of Washington researchers use paper to create band-aid sized sensors. The sensor, placed on a pair of glasses, can detect eye movement.  It's wearable and can also detect a heartbeat, pulse, the blink of an eye, finger movement and more.

Many Applications - All from Tissue Paper
The researchers tear the paper which is loaded with nanoparticles from carbon nanotube laced water. The carbon nanotubes create electrical conductivity.  The fibers of the tissue are broken.  It then becomes a sensor.  The scientists say it has wide applications in health care, entertainment and robotics.  For instance, it could be used to monitor a person's gait or eye movements to determine brain function.

Major Innovation
The sensor is light, flexible and inexpensive.  The major innovation is that it's a disposable, wearable sensor made from cheap paper.  The University of Washington researchers are looking to commercialize it.