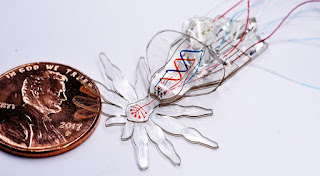 It's a tiny, soft robot, inspired by spiders, that may operate on humans someday.  Harvard and Boston University engineers and scientists developed it.  Their goal is to enable the robot to get to areas inside the human body that surgeons can't reach. This is the 1st time a flexible soft robot with an extensive range of capabilities has been created on such a small scale.  The process is called MORPH.

Robots One Millimeter in Size
Boston University and Harvard's Wyss Institute have developed a process to create millimeter-sized, flexible robots.  It's a hybrid technology that merges 3 different fabrication techniques.  With the process, the team created a soft robot spider made of silicone rubber.  It has 18 degrees of "freedom", meaning changes in structure, motion and color.  These devices are at the micrometer scale level, meaning they can operate in small, inaccessible places.

Many Applications
The soft robotic devices have significant potential applications in endoscopy, microsurgery, biomedical uses and wearables.  Despite the fact that it looks like the Australian Peacock spider, it most likely will have a prominent role in operating rooms in the near future.