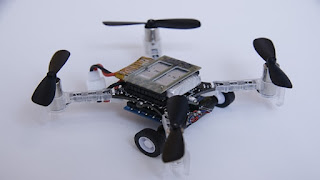 MIT roboticists have created what may be the world's most versatile robots.  They can fly and drive.  They are also autonomous.  And, according to the scientists, they can find their own safe paths.

No Collisions
The MIT team took 8, 4-rotor quadcopter drones and equipped them with 2 small motors and wheels. They developed algorithms to make sure they don't collide.  In test simulations, they fly and drive perfectly.

Combo Vehicles that Work
The robots can fly for 295 feet and drive 826 feet until their batteries run out.  The scientists say the most important implication of their research is that vehicles which combine flying and driving have the potential to be more efficient and useful than vehicles that just fly or drive.  They believe their experiments are helping to explore and forward ideas for flying cars.
#algorithms #autonomous #drones #flying #MIT #quadcopters driving robots