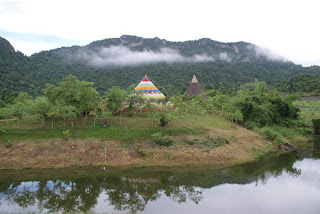 With rising temperatures, researchers in China are working on a new, low-cost weather modification system.  The goal is to increase rainfall in the Tibetan plateau by 10 billion cubic meters a year.  The rain making technology will produce 7% of China's total water consumption.

Asia's Water Tower
The Tibetan plateau is the largest freshwater reserve in Asia.  It feeds Asia's biggest rivers such as the Yangtse, Yellow and Mekong Rivers.  These rivers serve as a lifeline to nearly half the world's population.

Cloud Seeders
On steep mountain ridges facing the direction of the prevailing winds, the Chinese are building chambers.  They'll burn solid fuel to produce silver iodide, a cloud seeding agent that will produce rain and snow.  When the wind hits the chambers, it creates an upward draft and sends particles of silver iodide into the atmosphere.  Just one chamber can create a swath of thick clouds stretching more than 3 miles.

Large Scale Rainmakers
Cloud seeding has been done before, including in the US, but never before on such a massive scale.  500 burners are already deployed on the plateau.  A burner costs about $8000 to build and install, making these Chinese rainmakers relatively cheap.
#China #increasing rainfall #rainmaking tech #Tibet rain program