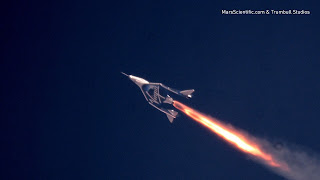 Amazing Flight
The spaceplane was released from under the wing of its carrier plane at 46,500 feet.  VSS Unity fired its rocket motors for 42 seconds to propel itself and the 2 pilots at Mach 2.47 or 2&1/2times the speed of sound.  The spaceplane reached an altitude of 170,800 feet or essentially halfway to outer-space before safely descending to its spaceport in the Mojave Desert.  Mission accomplished.

Get Ready for Tourist Takeoffs
Branson is indicating that Virgin Galactic could start commercial flights for space tourists soon, even this year.  800 people have booked at $250,000 each.  There's significant competition in this emerging market, including Elon Musk's SpaceX and Jeff Bezos' Blue Origin that offer tourists brief suborbital trips.  Bon Voyage!!