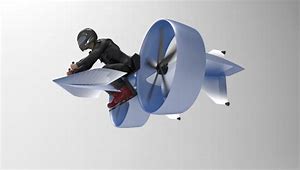 Increased Comfort Level
Team SILVERWING designed S1 from the rider's comfort level perspective and to clear the rigorous competitive standards set by Boeing GoFly.  The standards include safety, vehicle size, vertical takeoff and landing, noise level, payload and line of sight.  SILVERWING says the biggest challenge was to keep the noise level minimal while being able to carry a person.

S1 Specs
S1 takes off vertically.  The thrust for liftoff is provided by the 2 rotors, powered by electric motors.  It then transitions to horizontal flight like a plane.  To win GoFly, it has to fly non-stop for at least 20 miles with no battery recharging.

You Can Fly It
The Dutch team says even if you aren't familiar with the dynamics of flight, you'll understand and be able to fly their S1.  They believe they've designed something people are willing to ride/fly and make the dream of personal flight a reality.  Like the other Boeing GoFly Top Ten competitors, they're now building their working prototype to fly and win the $2 million prize in March 2019.
#Boeing GoFly #Dutch S1 #personal flight #rotorcrafts #Team SILVERWING