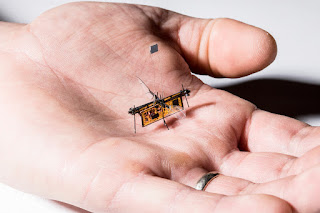 University of Washington mechanical engineers have cracked the code on tiny, flying robots.  Their creation RoboFly is the first tiny robot to fly free, untethered to a power source.  It's remarkable tech so tiny it can sit on your finger and then takeoff powered by laser light.

Teaching RoboFly to Smell
The University of Washington team has a goal and mission for RoboFly.  It's tiny and highly maneuverable.  They want to teach it to smell.  So that it can fly into crevices and detect, for instance, the smell of gas.  In effect, it's a tiny search robot that initially through smell can serve as an early warning system that there's a gas leak.

Tech on the Fly
This flying robot is just like its insect inspiration.  It has delicate, transparent wings.  It contains a photovoltaic cell that converts laser light into electric power that lets it fly.  A microcontroller in an onboard circuit acts as a brain.  It sends pulses of voltage to the wings and makes them fly like the insect.  It's remarkable tech that's just taking-off.