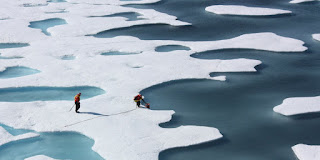 It sits on the top of the world at the North Pole.  It's a brand new ocean that's just been discovered. It's the result of global warming.  Over the past 30 years, the Artic has melted 2 times as fast as the rest of the world.  And the melting caused by Climate Change has spawned a new ocean.  And, so quickly, it's the object of international battles for ownership and oil, gas and mineral development.

Investment and Development Rights Battle
5 Artic nations are fighting for ownership. The stakes are huge.  As much as 90 billion gallons of oil and 47 trilllion cubic meters of natural gas are at stake, according to the Royal Institute of International Affairs.  Plus, there's a trillion dollars worth of minerals like gold, platinum and titanium. The technological and infrastructure investment to explore and develop the polar ocean is massive.

Global Warming Has Opened Access
Incredibly, global warming has opened access to this hidden oceanographic treasure. A number of nations are claiming ownership or likely will including Russia, Norway, Iceland, Denmark, Canada and Greenland which directly abuts it.  At the moment, the US is quiet about this. That's likely to change given the magnitude  and rich potential of this new ocean.
#climate change #global warming #new ocean #North Pole