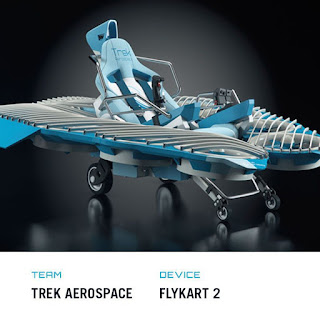 This vehicle was inspired by go-carts.  It's the creation of Trek Aerospace, a California engineering firm that specializes in fan powered watercraft and aircraft. FlyKart 2 is an off-road vehicle that can also takeoff and fly.  The company calls it a fun off-roader that soars.

Very High Tech
The vehicle is all-electric.  10 ducted propellers provide vertical takeoff.  The entire aircraft leans forward to cruise inflight.  All of the vehicle's movements are controlled through the thrusts from the propellers.

On the Cusp of the Flying Future
Team Trek Aerospace believes the FlyKart 2 is one of many potential flying vehicles in the future.  They believe we're just at the start of what electric aircraft with distributed propulsion can do. The FlyKart 2 placed top ten in Boeing's GoFly international competition and they're now competing for the $2 million prize.
#Boeing GoFly #FlyKart 2 #offroad vehicles #personal flying machines