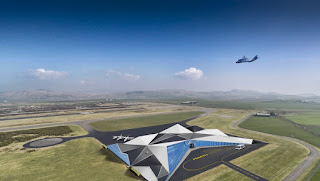 The UK is building its 1st commercial spaceport in northern Scotland.  They expect it to bring new jobs and billions of pounds to the British economy.  The vertical launch commercial facility is being built by Lockheed Martin along with a delivery vehicle to deploy up to 6 small satellites.  A British company is building a rocket for the site.

Race to Riches
Space is viewed as one of  the next big things for commercial development.  That's spurring a lot of plans to get a piece of the orbiting economy.  10 spaceports have been approved in the US. Locations include Texas, Georgia and Alaska.  In Canada, a spaceport is cleared for Nova Scotia with an initial launch set for 2021.

British First
The UK's spaceport is Europe's 1st one-stop location for building, launching and operating satellites.  They're putting up $66 million to develop their base to capitalize on commercializing space.  They believe their strategic, northern latitude location makes them well placed for polar and near polar orbits.

Florida and French Guiana
Right now, most commercial launches take off from Florida with NASA and French Guiana, where the European Space Agency launches.  But that's about to change.  As nations increase their investments into spaceport infrastructure and go for the orbiting gold.
#commercializing space #NASA #spaceport #UK spaceport