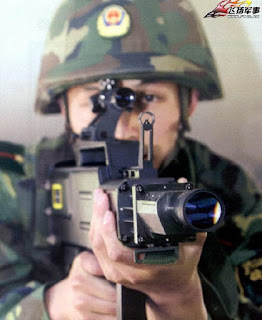 It's straight out of Star Wars but it's real.  Chinese researchers have developed a laser gun that can set a target on fire from 1/2 mile away.  It's called the ZKZM-500.  And, it's a 15mm caliber assault rifle that weighs 6.6 pounds.  According to the South China Morning Post, it's ready for production.

Immense Fire Power and Laser Tech
The laser gun can fire more than 1000 laser shots, with each lasting up to 2 minutes.  It produces a silent, invisible energy beam making it a stealth weapon that would be very difficult to spot or trace.

Powered by Lithium Battery and "Non-Lethal"
The gun is powered by a rechargeable lithium battery very similar to what's found in a smart phone.  According to the Chinese government, it's a "non-lethal" weapon as it was not designed as lethal.  At any rate, it's breakthrough tech to be aware of that is supposed to be sold only to Chinese police and military forces.