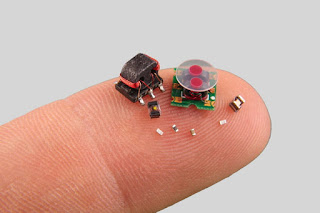 DARPA, the US Defense Department's Advanced Research Projects Agency, has just announced a bug sized Olympic Robot competition.  They're asking for innovative designs for robots that measure a fraction of an inch.

On Your Mark, Get Set, Go
This isn't fun and games.  This research program is serious and potentially life-saving work.  DARPA's mission is to provide the US military with overwhelming technological advantages.  It's storied history of innovation includes GPS, cloud computing, the internet and most of the world's most advanced robots.  The tiny bots are going to compete against each other for agility, strength and speed for dangerous missions.

SHRIMP
SHRIMP is the name of the tiny robot program. It's DARPA's Short-Range Independent Microrobotic Platforms.  The bots are going to be tested for use in locations people can't navigate or are dangerous and inaccessible to humans.  DARPA sees the potential of the tiny bots being used for search and rescue and to inspect hazardous locations.  The "Olympic" bots are designed to keep human first responders and military personnel out of harms way.
#DARPA #robot Olympics #robot search & rescue #tiny robots