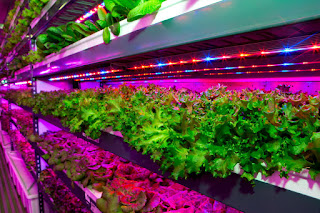 By 2019, the emirate of Dubai will have the world's largest vertical farm.  A no-pesticide, veggie source that will be the envy of the green-friendly world.  Ironically, it's being built by a tiny Silicon Valley, CA startup company Crop One. The company's partner is Emirates Flight Catering, one of the world's largest catering operations.

Great Veggies for the Super-Rich that's E-Friendly
It's a 130,000 sq ft. V-farm that will produce 6000 pounds of veggies daily.  Greens and herbs will be used for inflight meals at Dubai International Airport, the world's largest airport by international passenger traffic.  Construction starts in November 2018.  Veggies will be provided by December 2019 to 105 airlines and 25 airport lounges..

Vertical is Farming's Future
Dubai wants to be a global center of innovation and is financially backing it. Programs include the world's 1st robo-cop and fully robotic police station and the world's largest vertical farm.  V-farms grow crops indoors, year round with natural sunlight or LED's, with or without soil.

V-Farming Dubai Style
The greens will be grown under LED lights year-round.  They're grown in rooms that are climate controlled to optimal temperature and oxygen levels for each crop.  Instead of soil, the plants sprout in nutrient-enriched water beds on trays stacked floor to ceiling .  Sensors in the trays monitor how they're doing real-time.

Boston Too
Crop One has a vertical farm in suburban Boston.  It plans 2 more in the northeast US and 1 in the Southwest.  A cost issue with vertical farms is the high amount of electricity they rely upon., making it more difficult for them to compete in crop-rich areas.  Currently, the largest V-farm is in Newark, NJ at 69,000 sq. feet.