Israel's Robot You Dont Want to Mess With 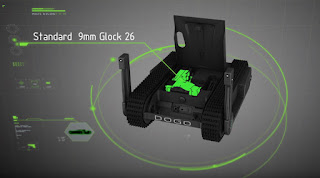 General Robotics of Israel is launching a "less lethal" weapons module attached to their warrior robot DOGO.  It allows intervention forces to remotely neutralize a threat without collateral damage to bystanders, buildings and also reducing the risk of killing the predator, so that they can be interrogated later.  With the push of a button, the human operator of DOGO can select an accurate lethal or less than lethal weapon for deployment on the robot.

Mace Onboard, Dazing Lights, & ID Dye
It includes a remote controlled Pepper Spray module.  Also invisable, ultraviolet light sensitive dye to ID the suspect.  And, a remote controlled Dazing Light Module that has stress lights and tactical lights to immobilize the perpetrator.  Add to that, it induces aversion responses from approaching persons.  Its range is 5m daytime and 10m nighttime.    This is an awesome robot you don't want to mess with.
#Israel #lethal robots #non-lethal robots #robots