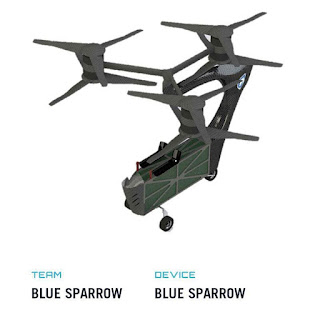 It definitely looks like a highly advanced helicopter.  It's a hexacopter created by a team of Penn State engineers led by Associate Professor of Aerospace Engineering Jack Langelaan. It's their winning design concept and technical specifications that landed them in a top ten contender spot in Boeing's GoFly International Competition for safe, small personal flying machines with vertical takeoff and landing and minimal noise. The competition underscores Boeing's belief that personal flight vehicles are part of the transportation future.

Rotor Power
6 rotors give the Blue Sparrow thrust.  The team gets flight control by modulating the rotor speeds.  That changes the thrust from each rotor and the torque from each rotor.  The total thrust controls acceleration.  Differential thrust and torque gives them control over pitch, roll and yaw.

Take off Time
The rubber is now hitting the road for the Blue Sparrow.  Team Captain Langelaan says the GoFly criteria to place in the Top Ten was rigorous and difficult.  Next steps are to finish building the prototype and start test flying the Blue Sparrow.