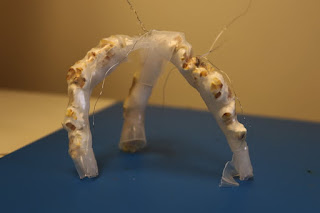 Break out the popcorn for this one.  Researchers at Cornell University have demonstrated that it's possible to use nothing but popcorn-popping-kernels to make a robot mechanism, like a gripper spring into action.  They just presented their research "Popcorn-Driven-Robotic-Actuators" at the International Robotics Conference in Australia.

Positive Robotic Pops
Popcorn is cheap, biodegradable and has impressive physical attributes, which is why the Cornell scientists chose it.  It pops at high force, can expand up to 15 times it size and changes viscosity.  It's that action of the popcorn kernel going from rigid to 15Xs expandability when it pops that's the key dynamic driving the popcorn robot.  The researchers heat the kernels.  The kernels pop and spring into action.  They've demonstrated their popcorn robot working with grippers.  To quote the Cornell team:  "The ability of the kernels to rapidly expand may be used to power miniature jumping robots."

Negative Robotic Pops
The downside of the method of activating the robots is that the popping is irreversible. Pops and that's it. That's a clear disadvantage over regular rechargeable batteries.  But, new kernels of popcorn can be reinserted to begin this novel robotic approach all over again.  The Cornell team sees a wide range of applications for soft, rigid and compliant robots.   It's eye-popping tech.