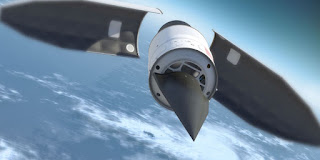 This is one of DARPA's most amazing, daring and high risk projects.  It's called the Falcon Hypersonic Technology Vehicle or Falcon HTV-2.  It was designed to overcome the many challenges of hypersonic flight, which is something DARPA is committed to developing.  It's a concept vehicle that has helped to pave the way to a hypersonic future.

DARPA's Goal
The end goal is a vehicle that can reach anyplace in the world in less than an hour.  Falcon, designed by Elon Musk's Space X in partnership with DARPA, was designed to go up to Mach 20 or 13,000 miles per hour.  That would take you from NYC to LA in 12 minutes.

Lost in Space
Falcon is an unmanned, rocket-launched maneuverable aircraft. Also it's a data-truck with tons of sensors onboard.  In a test flight several years ago, showing the difficulty and risks of developing this kind of advanced technology, DARPA harvested only 9 minutes worth of data, before losing contact with the vehicle.  The vehicle's development by DARPA remains on hold. But the concepts and goals for hypersonic flight are moving forward with speed., particularly with DARPA's Spaceplane, a new class of vehicles for hypersonic flight.


Many Lessons Learned for DARPA's SpacePlane