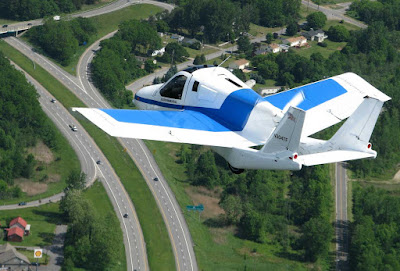 The FAA has given the Terrafugea Transition flying car permission to fly.  The next step  for Terrafugea is to secure approval from the National Highway and Traffic Safety Administration (NHTSA) for driving of the Transition.  Terrafugea hopes to win street legal designation from the NHTSA by 2022.  The Massachusetts based flying car company, founded by MIT engineers, is now owned by China's Geely, which also owns Volvo.  The company intends to take advantage of the FAA approval by selling flight-only models.  The driving and flying model should be available in 2022.

Terrafugea calls the Transition "the world's first practical flying car".  The vehicles wings can be folded so that it can be parked in a single car garage.  The flight-only model can hit flying speeds of 100 mph.  It has a rear mounted propeller powered by a 100 horsepower (75 kW/100PS) Rotax 912iS engine.  It runs on premium gasoline or jet fuel.  The vehicle includes an airframe parachute, a carbon fiber safety cage and a Dynom Sky Vision aviation package. The vehicle is in the light sports flying category.  The company hasn't yet released a price on the flying-only version.  It previously offered a $300,000 to $400,000 price range for the flying & driving Transition.