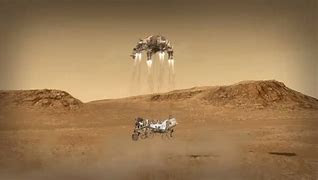 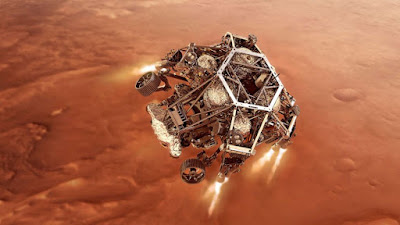 NASA's most advanced rover has defied the stiff Martian odds and successfully landed on Mars.  Cheers erupted late today in the NASA control room as the Perseverance rover, NASA's most technologically advanced rover that the team built for ten years, touched down safely on the Red Planet.  Hundreds of major technological maneuvers had to go right for this historic accomplishment.  The most important:  what NASA calls "the last 7 minutes of terror" when Perseverance was out of contact with NASA because of an 11 minute delay in radio wave communications with the Red Planet.  Perseverance was on its own maneuvering down to the surface of Mars on a rocket powered jet pack and finally lowered down by cables.  It is a technological wonder that worked!

This is NASA's most daring and ambitious effort in decades to study whether there was ancient life on Mars.  Perseverance is a $2.7 billion robotic exploring geologist that will scoop up rock, mineral and soil samples.  It carries the most sophisticated arsenal of scientific technology to date to search for life on Mars.  Interestingly, it has some company in the Martian region.  The UAE's Hope spacecraft and China's Tianwen-1 spacecraft entered orbit around Mars last week.

Mars is 126 million miles from Earth.  The technology to get Perseverance there is amazing.  Some new highlights from NASA as the rover descended onto Mars at supersonic speeds this afternoon:

Bottom-line:  Perseverance had to decelerate from 12,000 mph to a full stop from the time it entered the Martian atmosphere to the time it landed.  It did it!  And now it's on to exploring Mars in extraordinary ways for Perseverance, NASA and all of us for the next two years.