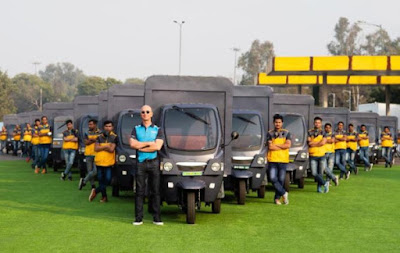 Amazon has big plans for building an e-commerce mega-business in India.  It plans to have 10,000 electric delivery vehicles - electric, 3 wheeled "rickshaws" - deployed to do business in India by 2025.  Amazon took a big step toward that goal yesterday when it signed a partnership agreement with Mahindra, which is India's e-mobility giant.  The vehicle that Amazon is deploying is called the Treo Zor.

The Treo Zor is a three-wheeled electric delivery vehicle capable of carrying 1200 pounds.  Amazon already has 100 of the vehicles operational in cities like New Delhi.  Amazon is placing a big bet on doing big e-commerce business in India and it is underscored by Amazon making this investment.

Government of India's Commitment to EVs

The Indian government has an aggressive,  five year plan in place that promotes and incentivizes the use of EVs.  It is also building an extensive network of charging station infrastructure to support widespread use of EVs.  The Amazon-Mahindra 10,000 electric "rickshaw" deal plays right into the government's plan and helps to accelerate the use of EVs in India.