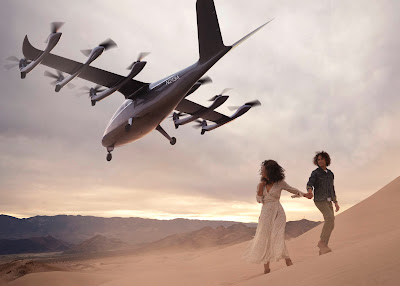 United Airlines is making a strategic move to deploy e-VTOL flying taxis to bring passengers in big cities to its airport terminals.  United has placed a $1 billion order for 200 Archer Aviation electric, vertical takeoff and landing (e-VTOL) flying taxis.  To build up development money, Archer is going public in a reverse merger with a special purpose acquisition company (SPAC).  United is also investing an undisclosed amount in the new entity.  Archer will trade on the NYSE with an initial valuation estimated at $3.8 billion.

Archer's e-VTOL can carry a pilot and 4 passengers.  All electric, it has a 60 mile range and can travel at speeds up to 158 mph.  The  vehicle goes into test flights in the first half of 2021.  It will go into mass production in 2023 and will be fully operational in 2024, according to Archer.  Billions of dollars are needed to develop e-VTOLs, clear regulators and manufacture the thousands of e-VTOLS needed to facilitate urban mobility. Archer's SPAC deal may serve as a prototype.  Other e-VTOL startups like Germany's Lilium, Germany's Volocopter and California's Joby are also exploring SPAC mergers to go public.