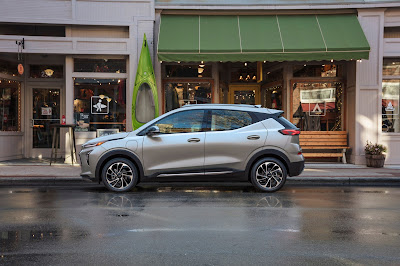 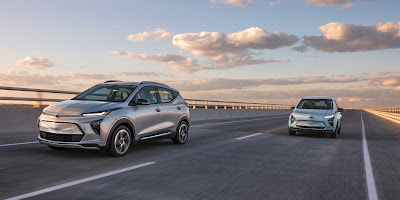 After four years of development, GM has unveiled its new Chevrolet Bolt EV and a new bigger version of the Bolt, the Chevy Bolt EUV.  For GM, the Bolt has been a big success to bring electric driving to the masses since its introduction in 2017.  Bolt sales surged 26% in 2020, despite the pandemic.  Bolts have been driven by owners for a staggering 1.2 billion electric miles in the past four years.

GM diligently consulted with Bolt customers and came up with a series of their desired upgrades now included in the 2022 Bolt.  The new Bolt EV comes with an upgraded charger 11kW that provides 42 miles of charge per hour.  It also contains an optimal charging cord.  Most importantly, GM is providing a standard at-home charging installation that is included in the vehicle's price.  The installation lets the owner plug in at night and have a fully charged car in the morning.  GM has also turned the Bolt EV into a small SUV, the Bolt EUV.

The Bolt EUV is essentially a small Bolt SUV with its key characteristics.  But, it is 6 feet longer than the EV.  About 3 feet of the extra 6 feet is used to increase space for passengers in the back of the vehicle.  That adds 100 pounds to the vehicle's weight so performance is slightly less.  This is GM's first EV with Super Cruise enabling lane centering and adaptive cruise control.

Pricing and Styling for the Mass Market

Both vehicles have updated Bolt exterior styling, which is more sporty and sleek.  They also have a more contemporary, soft interior. There is a new infotainment system in the dashboard with a 10.2 inch screen and easy, push button controls. There is an advanced instrument panel & upgraded steering wheel.  It is priced starting at $31,995 for the 2022 Bolt EV and starting at $33,995 for the 2022 Bolt EUV.  Both vehicles are getting some great reviews from automotive experts.  Bolt is giving the global EV industry a bit of a jolt in their pursuit of mass market consumers.