Tesla Roadster That Hovers in Air

The Roadster with Rocket Thrusters 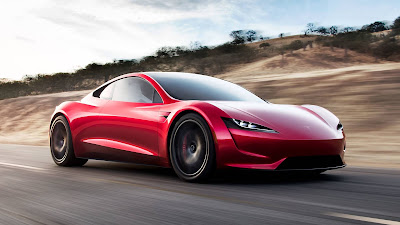 A Car That James Bond Would Love

Tesla founder and CEO Elon Musk says he wants his new Tesla Roadster to be able to hover in the air.  The Roadster comes equipped with rocket thrusters capable of top speeds of 250 mph with a range of 620 miles on a charge.  The sportscar is coming to market in 2022 at a price of $200,000.  Now, Musk has disclosed that he wants to additionally use the rocket thrusters to enable the Roadster to hover in the air, as far up as a meter above the ground.  It sounds like a vehicle straight out of a James Bond movie.

Musk is actively working on his concept of a "hovering" car.  He is focused on making it work and work safely.  Musk has made his global reputation on technological innovations and breakthroughs.  His redesigned Model S sedan and Model X SUV automatically shift between park, reverse, neutral and drive.  Musk says autopilot is getting so good you won't have to drive much anymore.  If he succeeds with his hovering car, that would be a big breakthrough.  He disclosed his plans on the Joe Rogan Enterprise program.