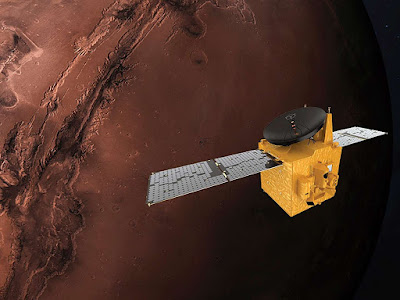 US Perseverance Probe Arriving on Mars Next Week

Mars is getting a lot of visitors arriving for Valentine's Day, mid February and staying for a few months beyond.  The United Amirate Emirates (UAE) mission Hope arrived yesterday and is in a stable orbit around Mars. Now, China's Tianwen-1 synced into another successful orbit around the Red Planet.  And, last but not least, NASA's Perseverance Rover spacecraft will touchdown on Mars next week.  Touchdown is expected on February 18, 2021.  Talk about a crowded destination in space.  There is a bit of intergalactic traffic converging on Mars and the scientific results could be spectacular.

The UAE spacecraft now in orbit is the size of a SUV.  And what is such a great technological achievement for the UAE, the Hope vehicle (al-Amal or hope in Arabic) used its autonomous, onboard computers to put itself into position for an equatorial orbit.  Every 9 days of the mission, Hope will sweep across and scan Mars entire surface.  This is part of the UAE's effort to transition its economy from oil based to science, tech & space based. This mission looks great - so far, so good!

For China's Tianwen-1, the journey to Mars took 6&1/2 months.  This is China's first, independent missions to Mars.  During the orbital phase that China has just achieved, a range of instruments, including high resolution cameras, will gather information on Mars' weather and atmosphere.  Tianwen stands for "Questions To Heavens", of which there are many.  To pursue answers, China expects to land a rover on Mars in May or June.  The rover will be solar powered and explore the surface of Mars for 90 days, looking for any sign of ice, water and ancient life using ground penetrating radar.

Perseverance Rover will land on Mars next week.  It will gather rocks for retrieval by another Mars mission by the US.  It will also launch a small helicopter called Ingenuity into the Martian atmosphere to see what's there.  Perseverance joins two other NASA rovers - Curiosity and Insight - now on the ground of Mars.  Lots of fascinating new space science to follow on these historic and innovative space missions.