Perseverance To Land On Mars February 18 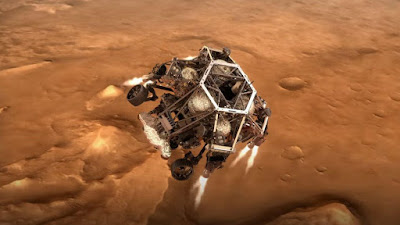 NASA's highly advanced robotic rover Perseverance will land on Mars on Thursday.  The potential discoveries are huge as Perseverance is the most advanced rover NASA has built.  Perseverance will serve as a geologist on Mars, collecting rocks, minerals and soil samples.  The mission's purpose is to search for any signs of ancient life on Mars.  The rover will also have a small helicopter onboard to conduct the first drone flights on another planet.

Perseverance has travelled onboard a spacecraft for the 300 million mile journey to Mars.  It will exit the spacecraft in a capsule for the descent into the Martian atmosphere.  The capsule will travel at a blistering 12,000 mph.  It will have to endure temperatures of 2,370 degrees F.  Then, rover will release by supersonic parachute travelling 750 mph toward Mars.  A mile above Mars, Perseverance will descend with a jetpack on its back for the landing.  The mission is extremely difficult to accomplish.  In fact, NASA scientists call the last seven minutes before the landing "7 minutes of terror".  The communications with NASA has an eleven minute delay so Perseverance is on its own in the final minutes before landing.

Perseverance will touchdown in an area called Jezero's Crater, an ancient lake bed where scientists believe there is a good possibility that life may have existed.  The samples that the rover retrieves will return to Earth by 2030.  Perseverance is by far NASA's most advanced, robotic rover.  NASA scientists caution that only 50% of the spacecraft launched to Mars make it there safely.  They've done everything technologically possible to give Perseverance the best of chances.