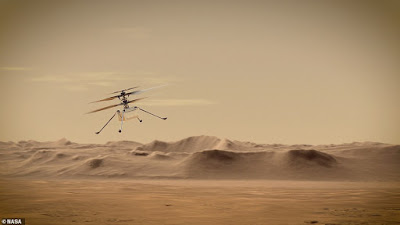 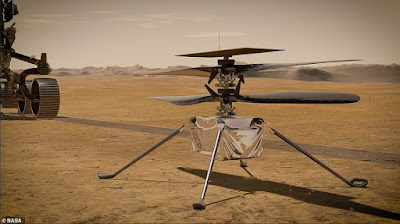 NASA's Perseverance rover's travelling companion to Mars, mini-helicopter Ingenuity, has sent a positive status report to NASA Mission Control.  Ingenuity sent it by phone.  Ingenuity is a small helicopter drone that will detach from Perseverance and attempt the first drone flight on another planet.  It weighs 4 pounds and is specifically designed to fly in the Martian atmosphere which is 100 times thinner than the Earth's atmosphere.  The helicopter is equipped with a camera and will take images of the Martian surface.

Perseverance will take the next 30 to 60 days to find an area suitable for Ingenuity to take off and land on.  In the next several days, the mission is to get Ingenuity's batteries fully charged.  The power source is Perseverance's radioisotope power reactor.  NASA has determined by a downlink through the Mars Reconnaissance Orbiter that the chopper and its base station are operating normally.  The base station is commanding heaters to switch on and off to keep the helicopter's electronics in a safe temperature range.

The primary mission for Ingenuity is to serve as a test of a powered drone mission in the Martian atmosphere.  If the first flight of 20 seconds is successful, four longer flights will take place.  Virtually every move being taken by Ingenuity and Perseverance to prepare for the historic flight is a technological first.  Ingenuity survived Perseverance's landing at the Jezero Crater on Mars.  Ingenuity was and still is attached to the rover's underbelly.  NASA technology thus far has performed flawlessly.