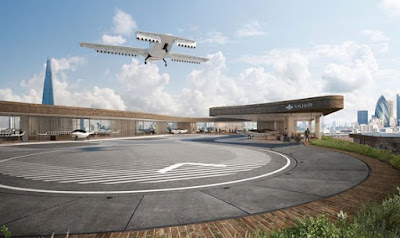 Development To Happen in China

VW, the world's biggest automaker and a leader in automotive innovation, is conducting feasibility studies in China to develop flying cars.  China is the world's largest automotive market. VW's approach is precise and methodical.  VW says it is looking into potential concept flying cars and potential partners.  VW wants to "industrialize" the development of flying cars, meaning mass production, global use and major commercial and consumer impact.  The company believes that the next mobility platform beyond autonomous driving is vertical take-off and landing vehicles - flying cars.

The company wants to start the process with a drone that would be licensed as the first step in entering the flying car market. A number of companies around the world including GM, Airbus and startups like Germany's Lilium are developing flying cars or e-VTOLS, electric vertical takeoff and landing vehicles.  Lilium has announced that it is setting up a US Hub in Orlando for its flying e-VTOLS, which are flying taxis,  to service a market area potential of 20 million people.  The vehicles can cover a 185 mile market area.

The potential of the flying car/flying taxi/ eVTOL market is huge.  Morgan Stanley estimates the market could be worth $1.5 trillion by 2040.  Standby for flying car/taxi takeoffs and landing coming very soon.