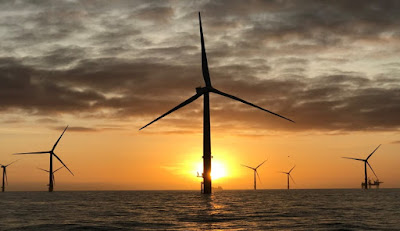 The United Kingdom has just held its first major wind farm lease auction in more than a decade.  A total of six projects proposed by BP, France's Total and Germany's RWE were successful bidders.  The projects will generate 8 gigawatts of capacity which would be enough electricity to power 7 million homes. By 2030, Britain plans to generate one-third of its electricity from offshore wind.  This is part of its effort to be carbon neutral by 2050.

Global Wind Power is Ramping Up

Countries around the world are building green energy projects such as offshore wind farms to slow global warming and abide by the Paris Climate Accords.  The government of South Korea announced yesterday that it is investing $43.2 billion to build the world's largest offshore wind farm by 2030.  Right now, Britain has the largest offshore wind market with 33% of all installed capacity.  Germany is #2 with 24% and China is #3 with 23%.  Clearly, developing new green sources of energy is becoming a global megatrend.