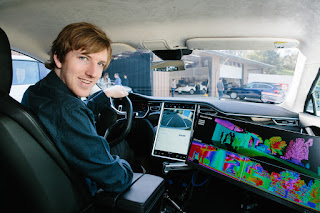 This morning, 25 year old entrepreneur Austin Russell woke up a billionaire.  His company Luminar Technologies of Florida went public yesterday on the Nasdaq.  By the end of day, it hit $22.98 a share with a market value of $7.8 billion.  Russell founded the company at the age of 17.  He owns more than 100 million shares and his net worth overnight skyrocketed to $2.4 billion. He has created lidar sensor technology that uses lasers to power autonomous vehicles.  His technology is considered breakthrough.  Forbes is calling Russell the world's youngest, self-made billionaire.

Luminar Technologies' (LAZR) lidar tech utilizes lasers to bounce off the car's surroundings and lets it see where it is going.  It provides 360 degree surroundings' intelligence to guide the autonomous vehicle real-time as it self-drives.  Daimler has invested in the company.  Luminar and Daimler expect to deploy the autonomous technology in tractor trailers by 2022. Russell estimates that autonomous big rigs alone represent a $1 trillion market opportunity in the US. Luminar also has contracts to deliver the autonomous tech to Volvo and to Intel's Mobileye.

Russell dropped out of Stanford University as a teen to start Luminar with the lidar technology he had invented.  To help, he received a fellowship from Silicon Valley's famous investor Peter Thiel, who also helped Facebook take-off.  Now that his company has gone public, Russell says his focus now is all about "scale, execution and seeing it through".