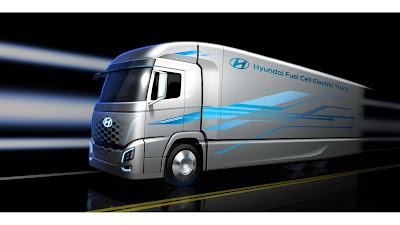 Hyundai recently unveiled some key components of its strategy for the future, including hydrogen powered vehicles.  Hyundai has unveiled its new hydrogen fuel cell powertrain HTwo.  It stands for hydrogen's molecular structure H2.  HTwo will be the hydrogen powertrain for Hyundai's next generation fuel cell vehicles.  And Hyundai wants cars, boats, trains and future large scale vessels to be powered by HTwo.  Hyundai's ultimate goal is to seriously fight climate change as hydrogen is emissions free.  The South Korean company is currently prioritizing increased energy density and affordability of its hydrogen powered vehicles.

Hyundai is also focusing on urban air mobility vehicles or flying taxis.  It is aiming to power flying taxis with its HTwo powertrain, which would make them green, clean commuting systems for urban areas.  Finally, Hyundai also has a keen interest in developing autonomous vehicles.  It recently purchased the majority stake in Boston Dynamics, a world class robotics company famous for its robodog Spot.  Hyundai is looking to incorporate the highly advanced robotic technology into the autonomous vehicles it is developing and undoubtedly powering them with the HTwo powertrain.