Zoox Travels Up to 75 MPH 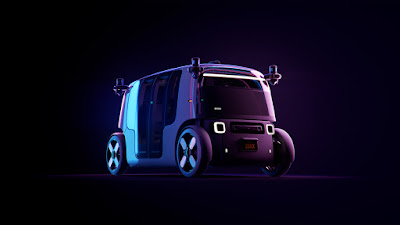 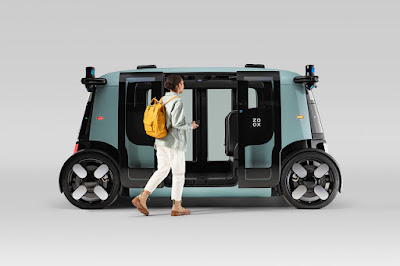 This is a new example of USA travel innovation that is green and self-driving.  Amazon bought the California based, autonomous, robotaxi service Zoox in June 2020.  Now, Amazon has unveiled a cutting edge Zoox robotaxi under development for the past six years that Amazon's investment has helped bring to fruition.  The robotaxi is electric, autonomous and loaded with technology, including sensors, artificial intelligence, lidar and a lot more and has no steering wheel.  The vehicle is designed like a cube and can transport up to 4 passengers.  It can hit speeds up to 75 mph. The vehicle contains innovative, awesome technology that Amazon is rolling out.

The Zoox can change direction without going into reverse.  It has four wheel steering and can drive bidirectionally for unprecedented maneuverability in tight urban spaces. With its 133 kilowatt-hour battery, it can operate 16 continuous hours on a single charge.  The airbags onboard envelop and protect each passenger.  Zoox says that amounts to a five-star rating.  Most importantly, it has radar, lidar and sensors providing a 270 degree view on all four corners of the car to track what's around it.

Being Tested on the Road

Zoox is being tested on private roads and will move onto public roads.  It needs some regulatory approvals.  But, the intent by Amazon is to launch it as a commercial ride-hailing service and also as a delivery package service.  This is great transportation innovation to watch as it develops from Amazon and Zoox.