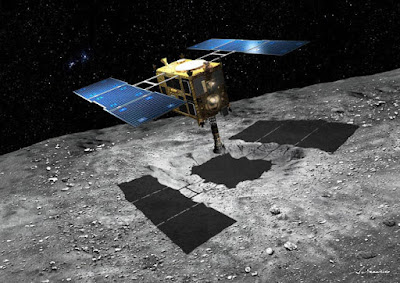 The Japanese space agency JAXA has announced that its spacecraft Hayabusa2 has successfully retrieved asteroid dust from the asteroid Ryugu in space.  The scientific hope is that the asteroid dust will contain clues to the origin of the Earth and the solar system.  Japanese scientists also hope to learn "how water was brought to Earth".  The asteroid dust dates back 4.6 billion years.

The asteroid mission was a long and arduous one.  It underscores the innovative leadership role that Asian nations are taking in space.  Last week, a Chinese robotic spacecraft collected samples of the Moon's surface.  That is the first time since 1972 that lunar soil has been retrieved from space.  Now, the Japanese have captured asteroid dust in space.  The Japanese probe landed twice on the asteroid Ryugu, used explosives to create a crater and collected debris samples. The mission lasted six years.

The mission started in 2014.  The Japanese spacecraft landed on Ryugu in November 2019, collected the samples and then began the return trip to space.  It landed yesterday in the outback of Australia. Japan and Australia have a strong space exploration partnership.  The capsule of asteroid dust was ferried by helicopter to a space research facility that JAXA has in Australia.

Asteroids formed at the very beginning of our solar system and may contain organic material that could have been part of the process of the creation of life on Earth.  Global scientists are excited about the prospects of learning exactly what the asteroid dust contains.  In the meantime, the Japanese spacecraft Hayabusa2, after landing in remote Australia and dropping off the capsule of asteroid dust, took off and returned back to space.  The Japanese have developed some very awesome spacecraft technology.