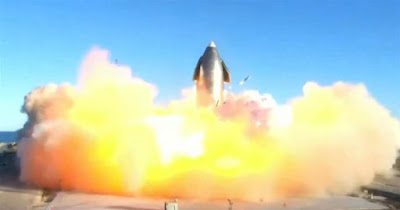 SpaceX's Starship launch vehicle is the centerpiece of CEO Elon Musk's dreams to take humanity on affordable trips to the Moon and Mars.  On December 9, 2020, the Starship prototype launched for a test flight.  The vehicle performed well and reached an altitude of  41,000 feet - it's highest as of that date.  And it performed record setting, acrobatic flips in the air before landing.  The test flight went perfectly until the landing, when the test vehicle blew up in a fiery explosion.  No one was hurt.  Entrepreneur/inventor/CEO Elon Musk had a uniquely scientific take on the episode.  He learned from the fiery landing, made conclusions based on data the test provided and found ample reasons to move forward.  His reactions provide insights into the way one of America's most successful innovators thinks.

It appears that the Starship prototype didn't slow down enough before landing.  SpaceX says the event was similar to the many failed test landings of the company's Falcon 9 rocket until it worked. CEO Musk has identified the problem.  He believes that low pressure in the fuel header tank, during the landing, resulted in a high speed touchdown and the consequent massive explosion.  Musk has culled valuable information from the incident.  He says he received all the data he needed from the flight and can confidently move forward on testing the SN9 Starship prototype next.  This is rocket science at the very high speed, trial and error level.  There are fiery, hard ball lessons to be learned on the path to getting the new, innovative technology to perform perfectly.