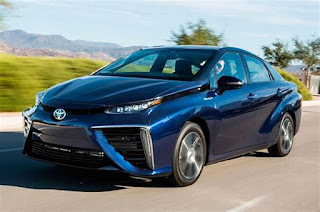 Toyota has introduced a revamped version of the Mirai hydrogen fuel cell car with 30% greater range.  The move is designed to jumpstart the use of hydrogen powered vehicles particularly in Japan.  It is also aimed at capitalizing on the rising demand for electric vehicles.

To date, drivers in Japan have not embraced fuel cell vehicles (FCVs).  Consumers are concerned about a number of issues, including the resale value of the cars, the availability of hydrogen fueling stations and the risk of explosion.  But Japanese Prime Minister Yoshihide Suga announced a goal to make Japan carbon neutral with zero carbon emissions by 2050.  Toyota believes hydrogen is a critical factor in achieving that goal.

Toyota says the new Mirai is a "departure point" for broad use of hydrogen fuel, even beyond cars.  Interestingly, Toyota has little competition in hydrogen vehicles.  Only Honda and Hyundai have competing FCVs.  Launched six years ago, only about 11,000 first generation Mirai's have been sold.

The new Mirai is priced at $48,000.  Toyota is increasing production and also testing small FCV trucks for supermarket deliveries.  Moving forward, Toyota wants to lure customers by extending the range to 497 miles, including features like autonomous parking and providing a very sleek, modern design.  It also plans to sell the vehicles in China through partnerships with China's FAW Group and Guangzhou Automotive Group.