Mystery EV That Subaru's Been Working on For Years 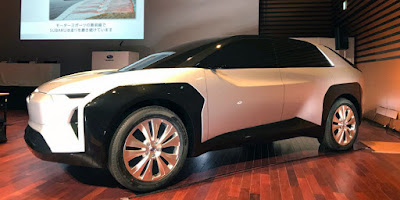 Subaru has confirmed that it is developing an all electric SUV.  The company says it is a mid-sized vehicle, that's similar to the size of the Subaru Forrester.  Toyota has a large financial stake in Subaru.  The new EV will be built on a platform that Subaru shares with Toyota.

The company is quiet about specific details. For instance, it says that the EV will be launched sometime in the first half of the 2020's.  The announcement was made by Subaru Europe, which indicates that the vehicle's target market will be Europe.  Subaru says it will provide more details in 2021.  It has not provided a price range.  This will be Subaru's first fully electric SUV.  The company is headquartered in Tokyo, Japan.  It has been much more focused on developing hydrogen powered vehicles.