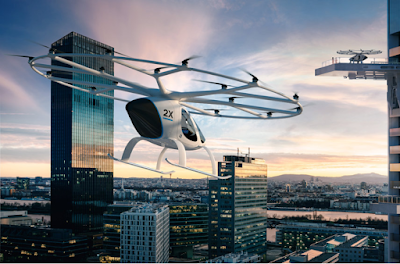 Germany's Volocopter will start flying taxi service in Singapore by 2023.  The first flights will carry a pilot and one passenger.  When cleared for autonomous operations, the Volocopters will carry two passengers.  This is a world first and the beginning of an exciting era of flying urban mobility with Singapore leading the way.

Singapore At the Forefront

Singapore is at the forefront of putting flying taxis into service thanks to its more supportive regulatory environment for deploying new technologies as compared with other nations.  The Volocopter is nimble and small enough to travel into densely populated cities and take-off from small spaces.  It's an eVTOL or electric, vertical takeoff and landing vehicle.

Volocopter says it is working with Singapore battery developers, material scientists and with authorities to establish autonomous routes for the vehicles.  Volocopter will have a team of 50 pilots, engineers and operations specialists to support the Singapore operation.  Investors in Volocopter include Daimler, Intel and Geely of China.  The flights still need regulatory approvals from the Civil Aviation Authority of Singapore and the European Union's Aviation Safety Agency.