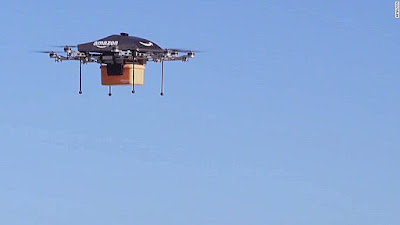 The Federal Aviation Administration (FAA) has just approved small drones flying over people and at night.  This regulatory clearance is viewed as enabling the start of widespread commercial drone package deliveries in the US.  For companies like Amazon, Walmart and UPS, this is a long-awaited decision and a big business opportunity.  Until now, drones have been restricted to very limited operations involving direct participants and required FAA clearance and waivers for more public exposure, such as testing drone package deliveries in specific neighborhoods.

The FAA is addressing security concerns by requiring remote identification technology on the drones so they can be identified from the ground.  The new regulations take effect in March.  Drone manufacturers have up to 18 months to produce drones with Remote ID.  Operators have an additional year to provide Remote ID.

Drones in the US Airspace

The FAA says the regulations are meant to integrate drones into the US airspace and address safety and security concerns.  All drones over 0.55 pounds will require Remote ID, which transmits by radio frequency broadcast, not by the internet.  For night operations, drones will be required to have anti-collision lights.  In the US, there are 1.7 million registered drones and 203,000 FAA certified remote pilots. So this is a big new avenue of new transportation.