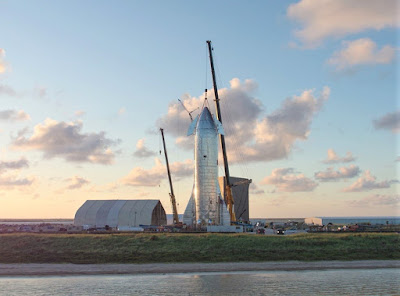 Starship is Space X CEO Elon Musk's space vehicle designed to carry humans to the Moon and Mars.  The prototype has been tested twice before in so-called "hop" tests to 500 feet.  This week, Musk has been cleared by the FAA to test the vehicle at 40,000 feet, an altitude higher than most planes climb.

Interestingly, Musk is downplaying the critical test of the vehicle's aerodynamic design and flight capabilities.  He's calling it a learning experience. On the SpaceX website, Musk said "With a test like this, success is not measured by reaching specific objectives but by how much we can learn."  He predicts a 30% chance of its reaching 40,000 feet.

Starship is SpaceX's Centerpiece to Travel to Mars & the Moon

Starship is Musk's next generation, reusable launch vehicle.  It is the centerpiece of Musk's plans to make space travel affordable for all of us. The vehicle's first suborbital flight test is expected to happen today or later this week.  The vehicle will be carried by 3, new Raptor rocket engines.  A highlight of the test will be how the vehicle returns to its landing pad.  It is scheduled to do a "landing flip maneuver" before touching down.